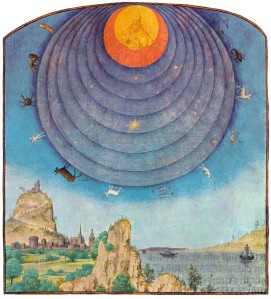 As an inaugural post I want to report the wise and inspired words and thoughts of Marsilio Ficino, Renaissance Florentine Philosopher in the tradition of Neoplatonism, from “De Vita Coelitus Comparanda”, which clarified the neoplatonic and hermetic perspective on astral influence on the sublunary world. Thanks to the mediation of  Anima Mundi, the Intellect – the Nous –  and the Body – the Matter – are hold together and the Ideas dwelling in the Intellect can be models for the seminal reasons in Anima Mundi and so put in the matter the seeds which are going to grow into manifestation. But let Marsilio’s words speak by themselves:

“If there were only these two things in the universe on one side the Intellect,

on the other the Body but no Soul, then neither would the Intellect be

attracted to the Body for Intellect is absolutely motionless, without affect, which

is the principle of motion, and very far away from the Body, nor would the

Body be drawn to the Intellect, for Body is in itself powerless, unsuited for

motion, and far removed from the Intellect. But if a Soul which conforms to

both were placed between them, an attraction will easily occur to each one

on either side. In the first place, Soul is led most easily of all, since she is the

Primum Mobile and movable of herself, of her own accord. Moreover, since,

as I have said, she is the mean of things, in her own fashion she contains all

things and is proportionally near to both. Therefore she is equally connected with everything,

even with those things which

the other side to the transient, and even turns to each by desire, at the same

time she is wholly and simultaneously everywhere.

In addition, the World-soul possesses by divine power precisely as many seminal

reasons of things as there are Ideas in the Divine Mind. By these seminal

reasons she fashions the same number of species in matter. That is why every

indeed it was made through the reason from the Idea. This is why, if

at any time the species degenerates from its proper form, it can be formed again

can then be easily reformed. And if in the proper manner you bring

to bear on a species, or on some individual in it, many things which are dispersed

but which conform to the same Idea, into this material thus suitably

adapted you will soon draw a particular gift from the Idea, through the seminal

reason of the Soul: for, properly speaking, it is not Intellect itself which

is led, but Soul. And so let no one think that any divinities wholly separate

from matter are being attracted by any given mundane materials, but that daemons rather are

being attracted and gifts from the ensouled world and from

the living stars. Again, let no man wonder that Soul can be allured as it were

by material forms, since indeed she herself has created baits of this kind suitable

to herself, to be allured thereby, and she always and willingly dwells in

them. There is nothing to be found in this whole living world so deformed that

Soul does not attend it, that a gift of the Soul is not in it. Therefore Zoroaster

“divine lures” and Synesius corroborated that they are magical baits.-

Finally, let no one believe that absolutely all gifts are drawn from the Soul

to anyone particular species of matter at a specific time, but rather at the right

moment only those gifts of that one seed from which such a species has grown,

and of seeds that are similar to it. Accordingly, the person who has employed

only human things, will thence claim for himself not the gifts proper to fish

or to birds but the human gifts and similar ones. But if the employs things which

pertain to such and such a star and daemon, he undergoes the peculiar influence

of this star and daemon, like a piece of wood treated with sulfur for

a flame that is everywhere present. And he undergoes this influence not only

through the rays of the star and the daemon themselves, but also through the

very Soul of the World everywhere present. For the reason of any star and

daemon flourishes in her. It is partly a seminal reason so that she can generate,

and partly an exemplary reason so that she can know. For according to

the more ancient Platonists, from her reasons, the World-soul constructed in

the heavens besides the stars, figures and such parts of them as are also themselves

figures of a sort; and she impressed properties on all these. In the stars,

moreover – in their figures, parts and properties – are contained all the species

of things below and their properties.”

So let’s see in our mind’s eye the Primum Mobile as the Anima Mundi revolving and moving the fixed stars sphere and the planetary spheres below till the sublunary world where the elements and qualities are stirred and put in motion. Let’s see the seminal reasons falling from the spheres like astral rain on the earth and grow and blossom into existence of events and entities. Let’s see our attitude, rituals and things, that show the influence and signature of an astral quality, be a receptacle of that astral power to be used to attune ourselves with life that comes from heaven.