In my whole life I have never written anything only for fun. I always tried to put in my lyrics a crack able to break the certainties, to doubt the opinions, to arouse indignation, to open the minds. Everything else, the beauty for the beauty, I do not care. The World According to Fo, Dario Fo

The Man, the Actor 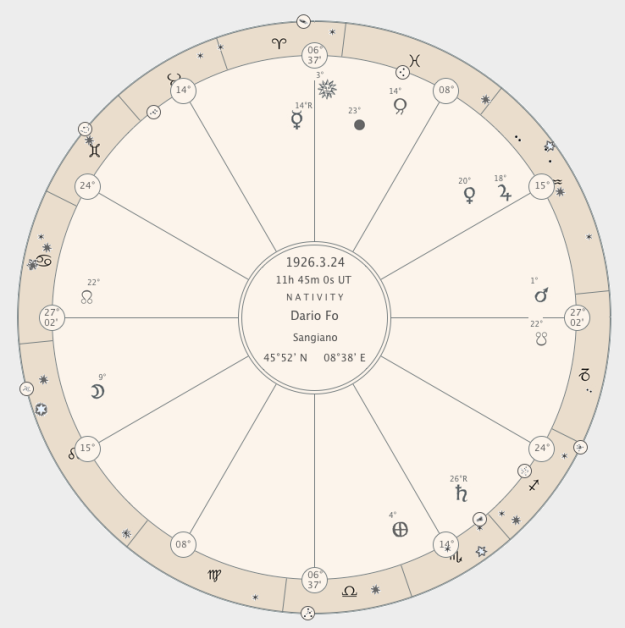 Dario Fo was born in Sangiano, near the Maggiore Lake, in Lombardy on the 3th of March 1926 at 12,25 according to the birth certificate. Since the birth registration was not very accurate in the first half of the twentieth century, I have opted to rectify the time by a method taught by ‘Cielo e Terra’. That method, called Isaritmia, is a sort of a more sophisticated version of the Ptolemaic animodar. The Isaritmia is defined as the mathematical correspondence between the  lord of the preceding syzygy and the rising angle or the culminating angle when the position of the planet, lord of the preceding syzygy, in the house where it is, measured in temporal hours, is equal to the position of the angle in the sign where is located, measured in ascensional times. I don’t want to go into details about this technique, which is not very easy to understand and calculate. Mars was the Lord of the syzygy preceding the Fo’s birth because in that syzygy Mars was rising at the horoscope and the luminaries where in Pisces in the triplicity and bounds of Mars. We can see more or less in the rectified chart above that Mars is away from the cusp of the VII house as the cusp of the MC from the beginning of Aries.

The Luminaries in his geniture are quite powerful. The Sun is exalted in Aries at the MC. The Moon is in Leo in the I house, an angular place. The Moon is moving away from the trine of the Sun and applying to Mercury in his bounds at the MC. Lets note that Mars is angular and squares the Sun both in mundo and the zodiac. Since Mars is oriental and lord of the Sun, Mars is doryphoros to the Sun. Those are sign of great dignity of the native and of a distinguished person as Ptolomy says in Tetrabiblos, Book IV, Ch.3, ‘Of the Fortune of Dignity’:

Here both luminaries are angular, Mars is doryphoros to the light in sect, the Sun and moreover Mars is angular. Also Jupiter is doryphoros to the Sun. Lets note the the star Sirius, the brightest star in the sky, of nature of Jupiter and Mars, is with the Moon. Moreover Mars is also the Lord of the Lot of Fortune.
Dario Fo  won the Nobel Prize in Literature in 1997. In his time he was “arguably the most widely performed contemporary playwright in world theatre” says Tony Mitchell in his book ‘Dario Fo: People’s Court Jester’.

Lords of Activity are Mercury and Mars. Mercury is at the MC and Mars, the Lord of both the MC and Mercury, squares them from the occidental horizon. Lets note that Jupiter and Venus, conjuncted in Aquarius, are in sextile with Mercury. Mercury is significator of professions involving communication and writing. The benefic Jupiter and Venus produce a profession concerning art and show and give grace and success. Mars adds sharp comic and bitter satire to his plays and acting. His plays are famous for putting in the pillory the powerful and showing the real face, both brutal and absurd, of the power. The Swedish Academy awarded Fo as a writer “who emulates the jesters of the Middle Ages in scourging authority and upholding the dignity of the downtrodden”

Milestones in his life

Dario Fo married Franca Rame, a theater actress, on 24 June 1954. Their professional and conjugal relationship lasted 59 years till she died in 2013.

Jupiter of direction in mundo is at the descendent. The Moon is squared by Saturn.

Mars, one of the lord of activity is at the horoscope in Virgo. Mercury the other Lord of Activity is in commutatio with Mars, being each one in the domicile of the other one. The Moon, the Lord of the Years, is in the I house close to the horoscope.

Saturn is the Lord of the year since the Ascendent is in Aquarius. Saturn of profection is in Cancer and squares the Sun of Nativity in Aries. Lets note that Sinos, the Lot of Illness, is at the IC in the profection, and the Moon of Nativity squares it. Also the  Sun of profection squared Sinos of nativity.

The Sun is the apheta since is the luminary of the time and he is at the MC in the nativity. Ptolemy in Tetrabiblos Book III, Chap. 10, On the length of life, says:

We see here that Sun, the apheta, arrives by direction to the occident, determining the end of his life.
Moreover Mars, the out-of-sect malefic, is with the Part of Fortune, but Mars is the lord of the Part of Fortune and therefore cannot really harm. The Lot of Sinos, or Illness, is with Saturn. 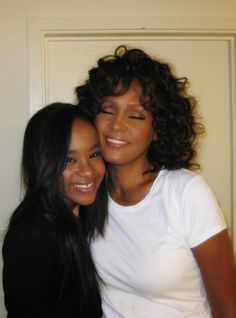 On the 26 of July 2015 Bobbi Kristina, Whitney Houston’s daughter died. She was kept in a medically induced coma after her husband found her face down in the tub in her Georgia home. It was only three year after that her mother, Whitney Houston, died in theBeverly Hills Hilton hotel, drowned accidentally in the bathtub.

Saturn, the out-of-sect malefic, in its domicile in Aquarius in XII place is in opposition to the Sun and Venus. Also it is in sextile with the Moon and Jupiter, Lord of the Horoscope, in Aries. So Saturn could be the anareta.

In the Solar Return for the 2011 Saturn is rising at the easter horizon in its exaltation in Libra. The Lord of the horoscope, Venus, is combust in Leo.

In the profection for the 11th of February 2012 the profected Sun reaches the the occidental horizon.

Finally at that time the directed Horoscope in the zodiac is arrived at the 20° of Taurus and so it squares the Saturn of nativity at 20° of Aquarius.

When Saturn is out-of-sect and opposes or squares the Sun in the solid signs he causes death by trampling in a mob, or by the noose, or by indurations. […] In Virgo and Pisces, or the watery signs, if the moon is in aspect, by drowning and suffocation in water

In Whitney’s geniture Saturn is the watery sign of Aquarius, in the fish tail of the Capricorn and is in opposition to the Sun and the it receives the application of the Moon.

Bobbi Kristina’s geniture is diurnal so the out-of-sect malefic is Mars. The Afeta is Sun in Pisces and Mars trines him from Cancer. Mars from its fall in Cancer trines Saturn in mundo.  Saturn, the Lord of the VIII place is in Aquarius in parallel in mundo with the Sun and Mercury in Pisces.

Bobbi Kristina Brown was found unconscius in her bathtub on January 31, 2015. In the previous Solar Return the Ascendent is in Cancer. The Moon, Lord of the Ascendent, is in the last degree of Aries, going to conjunction with Cauda and Mars, being her dispositor, is opposing her from the last degree of Libra. Saturn in Scorpio is in a equicrure aspect in mundo with the Sun.

In the Solar Return preceding her death, Mars is in Aries on the occidental horizon with Cauda and Venus which is the Lord of the Horoscope.

In the nativity Saturn is in Aquarius, but the Moon is not especting Saturn because she in aversion with it. Saturn in the nativity is Lord of the VIII place though. That seems enough to inflict to her the same destiny of her mother.