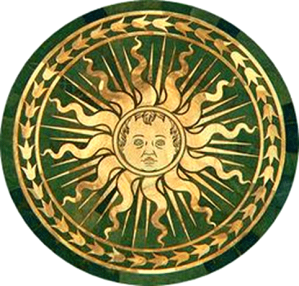 May the rays of the Intellectual Sun, reborn brighter in those days in the visible form of the planetary Sun, banish e dispel the darkness in our Soul and bring the light of awareness and understanding to our intellect and heart.

Nothing recalls the nature of goodness more than light. Firstly, light appears very pure and very exalted in the realm of the senses. Secondly, of all things it is most easily and widely radiated in an instant. Thirdly, it harmlessly encounters everything and penetrates it very gently and pleasantly. Fourthly, it carries with itself a nourishing warmth, that cherishes all things, bestowing life and movement. Fifthly, while it is present and within everything, it is spoiled by nothing and mixed with nothing. Likewise goodness itself stands above the whole order of things, is spread very widely, and caresses and attracts everything. It forces nothing; like heat, it emanates love as its companion everywhere, by which every single thing is enticed from every direction and willingly admits of its goodness. Penetrating into the innermost parts of things, it mixes with none of them. Finally, just as goodness itself is inestimable and ineffable, so assuredly is light. For not one of the Philosophers until now has explained the following: that nothing anywhere is clearer than light; but that on the other hand nothing appears more obscure, just as goodness is both the most recognised of all things, and equally the least recognised. For this reason Iamblichus the Platonist finally came to refer to light as a certain active vitality and clear image of divine intelligence. The ray shining forth from the eye is itself the image of vision. So too perhaps is light itself the vision of the heavenly soul, or the action of vision reaching out to exterior things – acting from a distance, yet not leaving the heavens, but ever continuing there unmixed with external things, acting at once by seeing and by touching. At least we are used to speaking of light as a trace of universal light, offering itself to our eyes in a certain proportion; or indeed, as a vital spirit between the soul of the world and the body – but we have already said enough about this in the Theologia. So whenever in your studies you make a serious attempt to postulate that there are many angelic minds beyond heaven, like lights, whose ordering relates them both to each other and to one God, the father of all lights, what will be the point in pursuing your investigations down long winding paths? Just look up at heaven, I pray, Oh citizen of the heavenly realm, at that heaven whose manifestly perfect order so clearly declares God to be its creator. When you look upwards at heavenly things, the firmament immediately announces the glory of God and the works of his hands through the very rays of the stars, and through the aspects or inclinations of their eyes as they wander. Above all the Sun is most able to signify to you God himself. The Sun offers you signs, and who would dare to call the Sun false? Finally, the invisible things of God, that is to say, the angelic spirits, can be most powerfully seen by the intellect through the stars, and indeed even eternal things – the virtue and divinity of God – can be seen through the Sun.